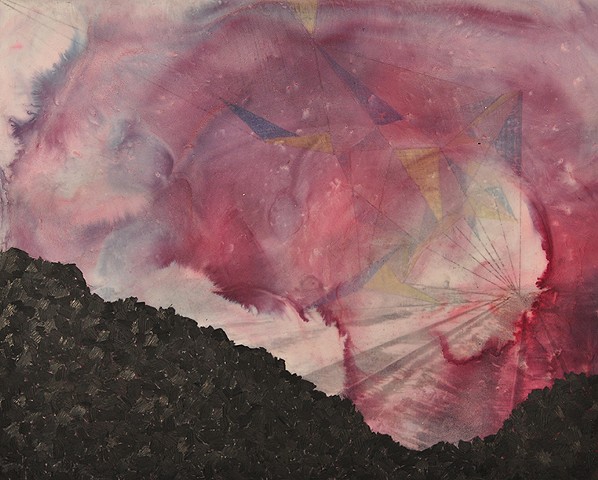 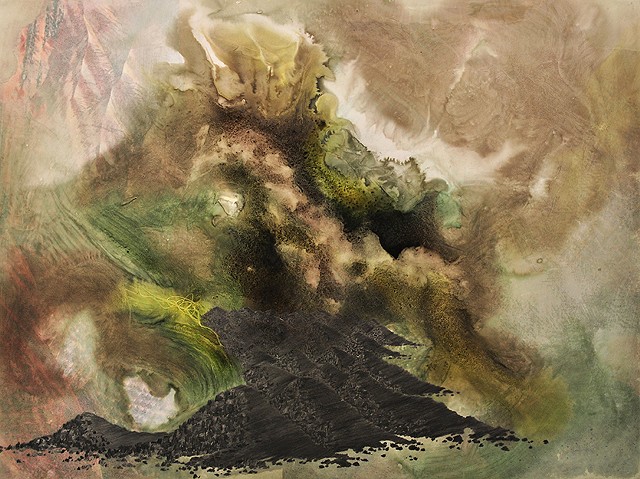 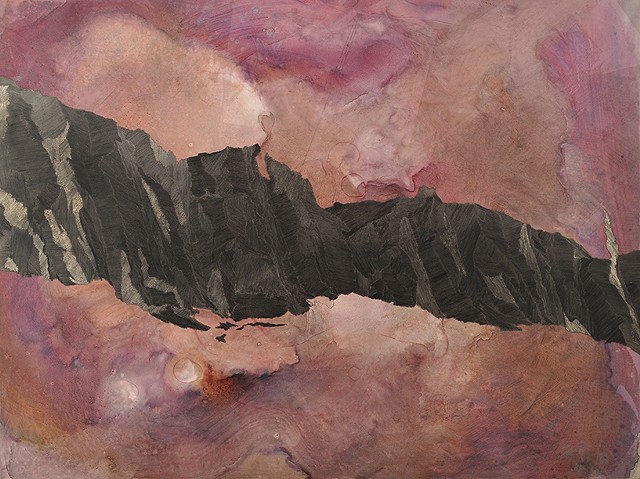 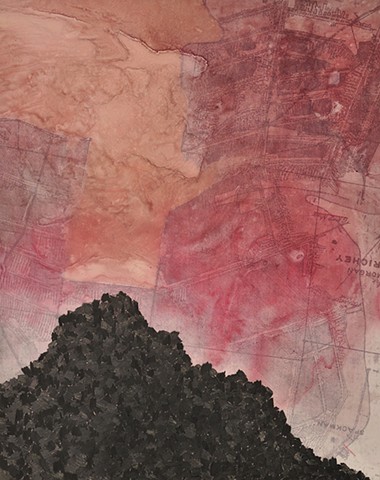 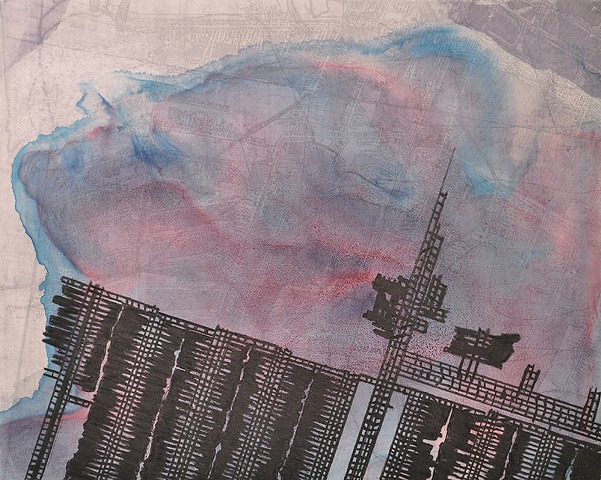 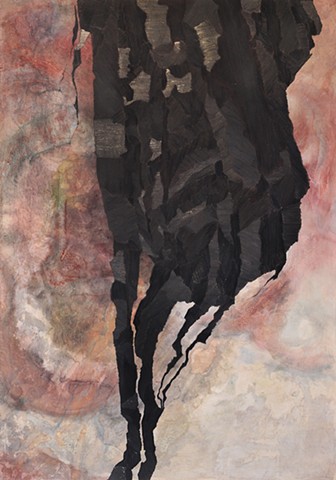 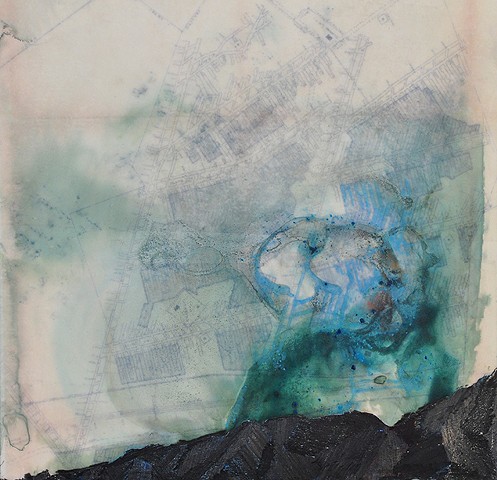 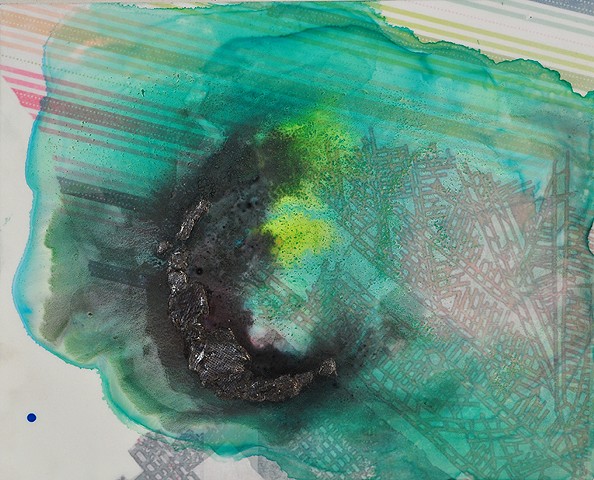 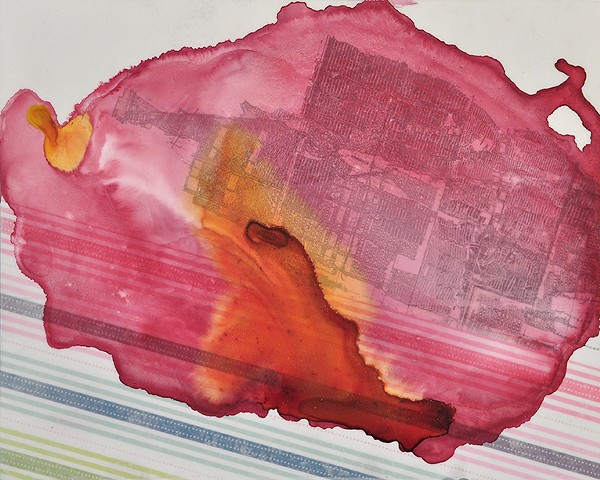 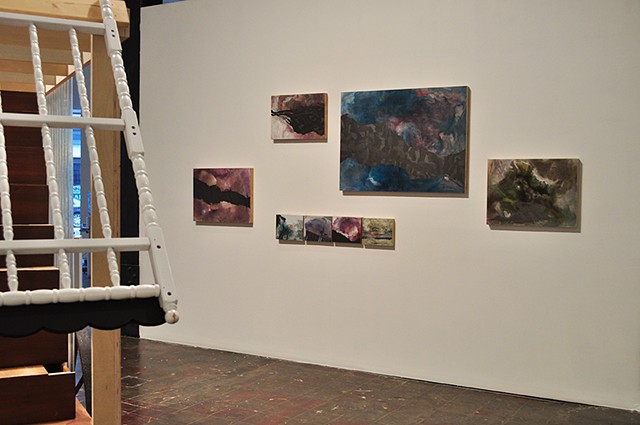 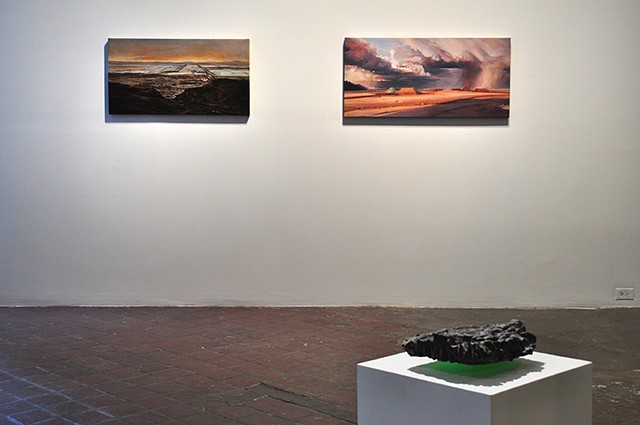 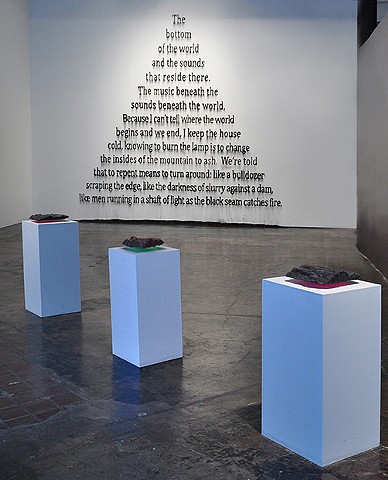 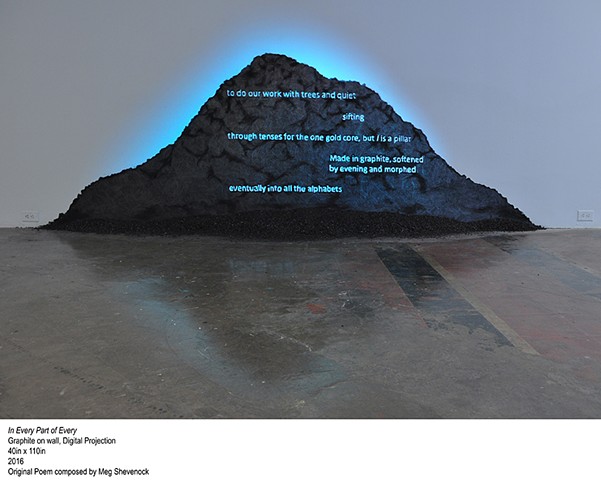 In Every Part of Every (Poem by Meg Shevenock) 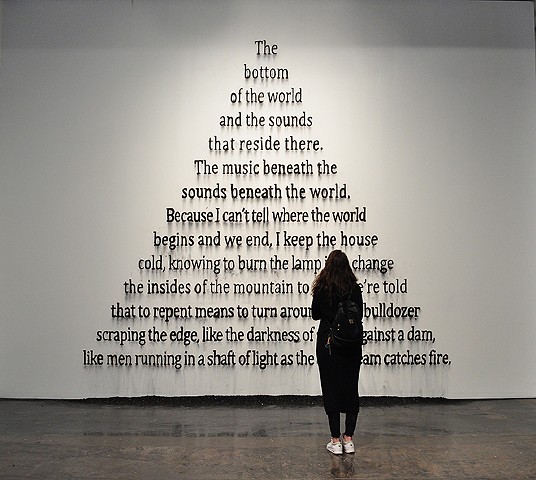 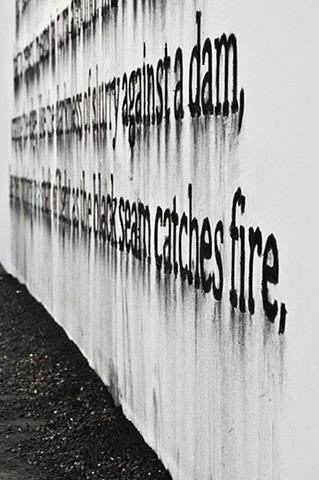 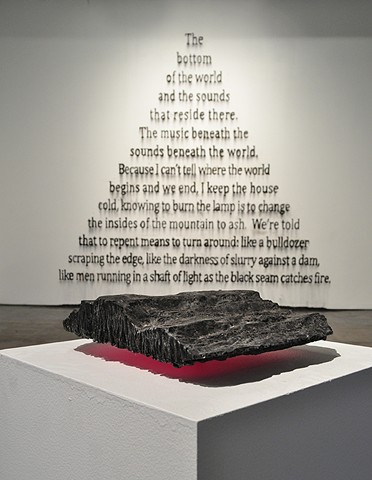 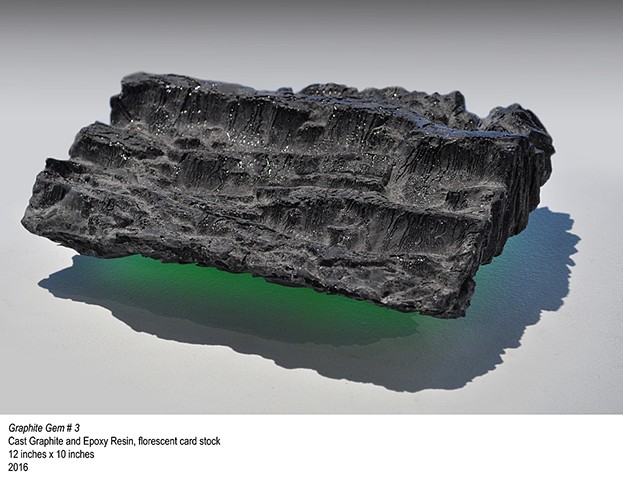 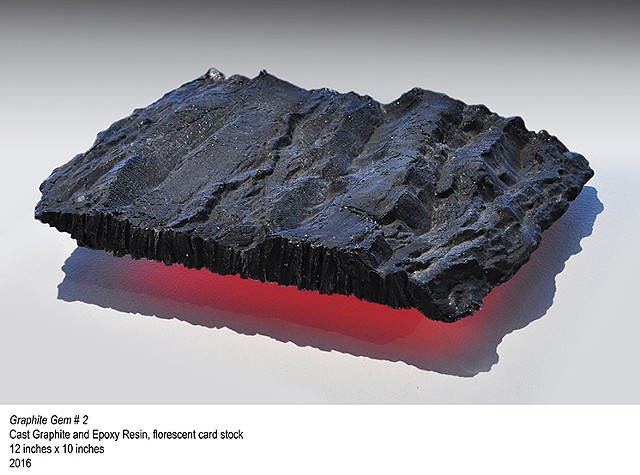 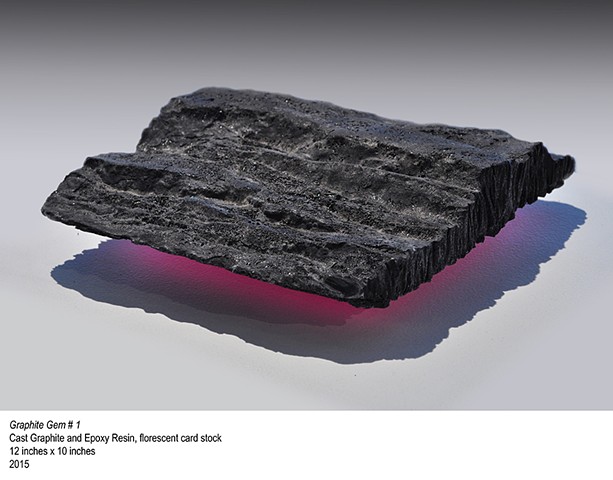 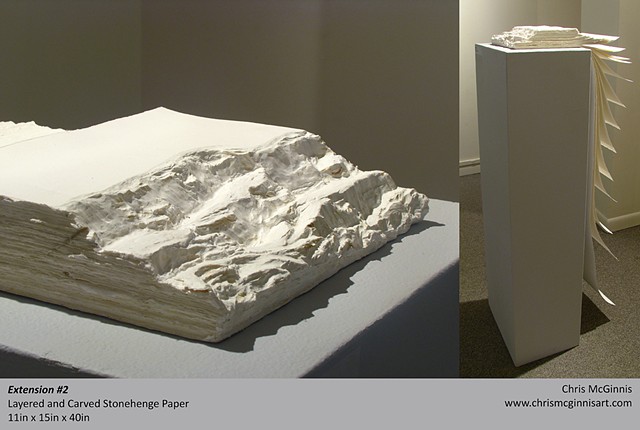 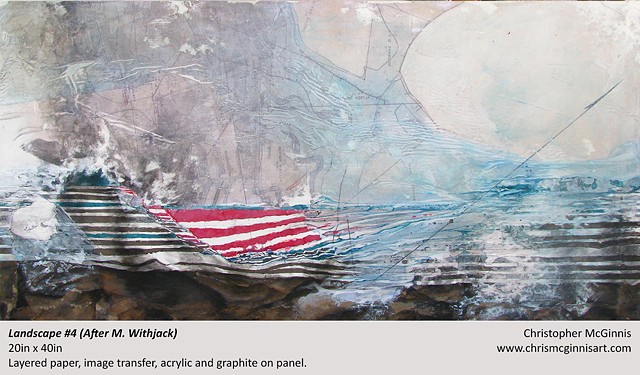 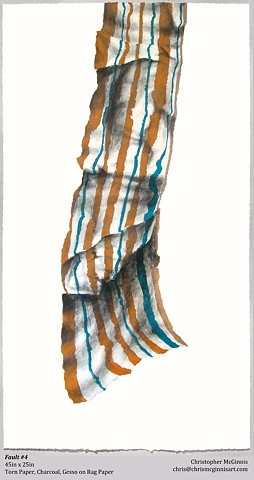 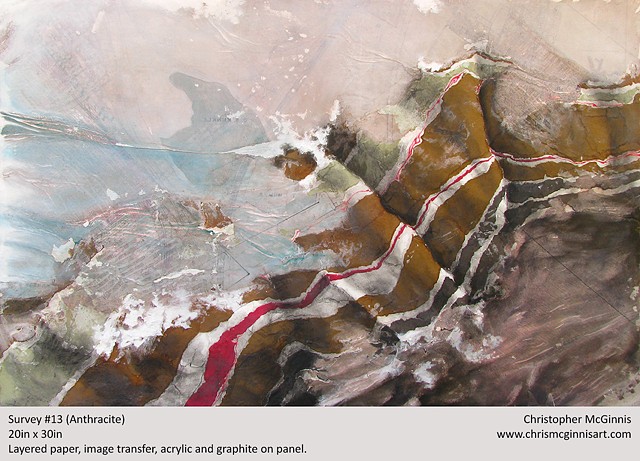 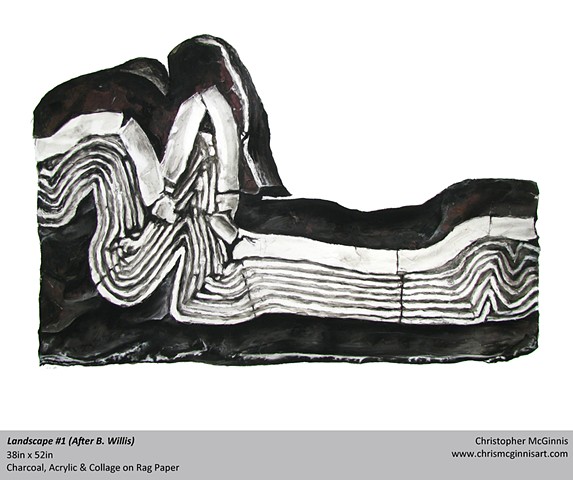 Landscape 1 (After B. Willis) 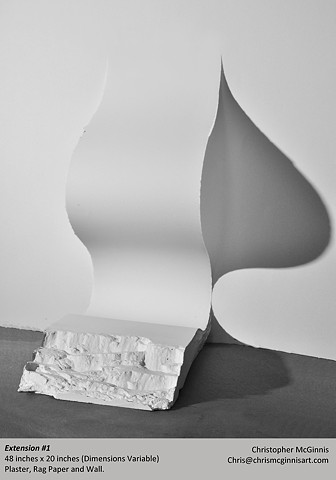 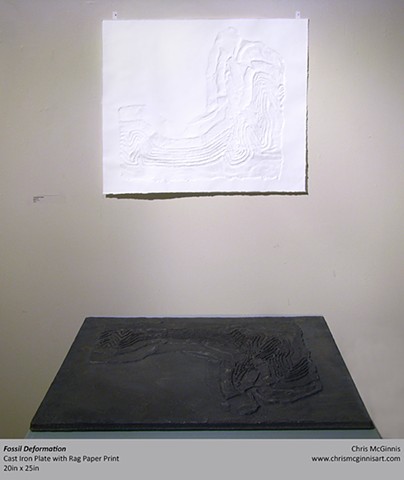 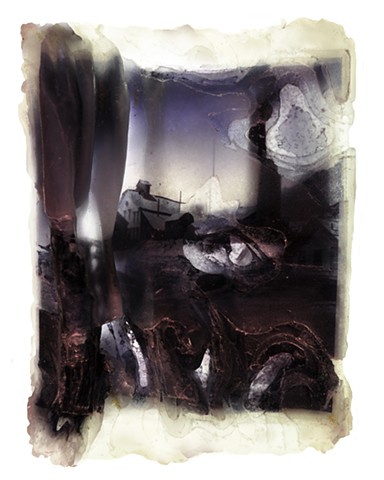 Thrust Excavation includes drawings, paintings and layered objects inspired by physical (analog) deformation modeling* and the coal-rich land of Southwestern Pennsylvania. These artworks explore a number of materials and processes from cast graphite and resin to wall drawn installations and poetic verse. My primary interest here relates to the value of coal as both a physical material and economic resource, and the complex circumstances surrounding its extraction. This subject matter is represented aesthetically through surface luster, layered mine maps, reflected color and mixed media approaches.

* Physical Deformation Modeling is a process wherein layers of viscous materials including sand, silicone, wax, clay and/or plasticine are manipulated by geologists to study the impact of stress upon the earth’s lithosphere (crust). Physical deformation models are small, layered objects intended to mimic land formations. Combined with digital mapping, these models help us understand the movement of strata beneath our feet and locate potential mineral deposits.

Over the past few years I have been drawn to deformation modeling as both a creative process and a symbol of our continued attempts to rationalize the natural world. Similar to the mountains they mimic, Physical Deformation Models are attractive physical forms with repetitive and often-colorful layers, organic folds and cracked strata. However they are also clinical objects that yield precise scientific data often used by extraction industries. As functional scientific models they perform instructionally. As beautiful objects created by humans, they perform artistically. For me, these models are perfectly situated between art and industry. They represent a continuing tension between romantic interpretations of the natural world and the enlightened rationalism that would exploit its beauty for wealth.

Around the turn of the 20th century geologists used warm wax to model thrust faults (A practice which has since been abandoned). Most of my initial imagery for Thrust Excavation came from wax thrust models created by Bailey Willis, a geologist and surveyor from the late 19th century. I found these to be particularly relevant given that much of my additional imagery came from the frontier photographers Timothy O’Sullivan and J. K. Hillers who were active during the same period.

I have also referenced contemporary extension models created by Martha Withjack, professor of geology at Rutgers University. In the early stages of this project I spent some time with the Structural Geology and Tectonics Group at Rutgers observing a researcher named Sean Kinney who was modeling thrust faults using sand and silicone. We looked at many cross-sections of Withjack's extension models during those visits that have informed my work for this project.

Physical deformation models are small, layered objects intended to mimic mountain formations. They are often created using wet clay or multicolored wet sand. Wet clay is most often used to model extension faults (like Rift Valley) where the deformation is caused by the earths lithosphere being stretched apart (extending). Thrust faults (like Rocky Mts) are more often modeled using wet sand. In this case, layers of colorful sand (representing various strata of the earths crust) are compressed together slowly to create a scaled-down version of how the real mountain was formed. This study of rift tectonics obviously gets MUCH more complex and well beyond my own level of knowledge. But I am not interested in using these models to study the lithosphere; I am interested in their metaphorical potential and capacity as art.

In both cases of thrust or extension modeling, the researcher would cut a cross-section to reveal how each layer was affected after the compression or extension. If in the beginning each layer was created with an accurate depth and viscosity then the resulting deformation can teach them a great deal about the actual strata that was deformed in land formation they are modeling and the potential location of mineral deposits.